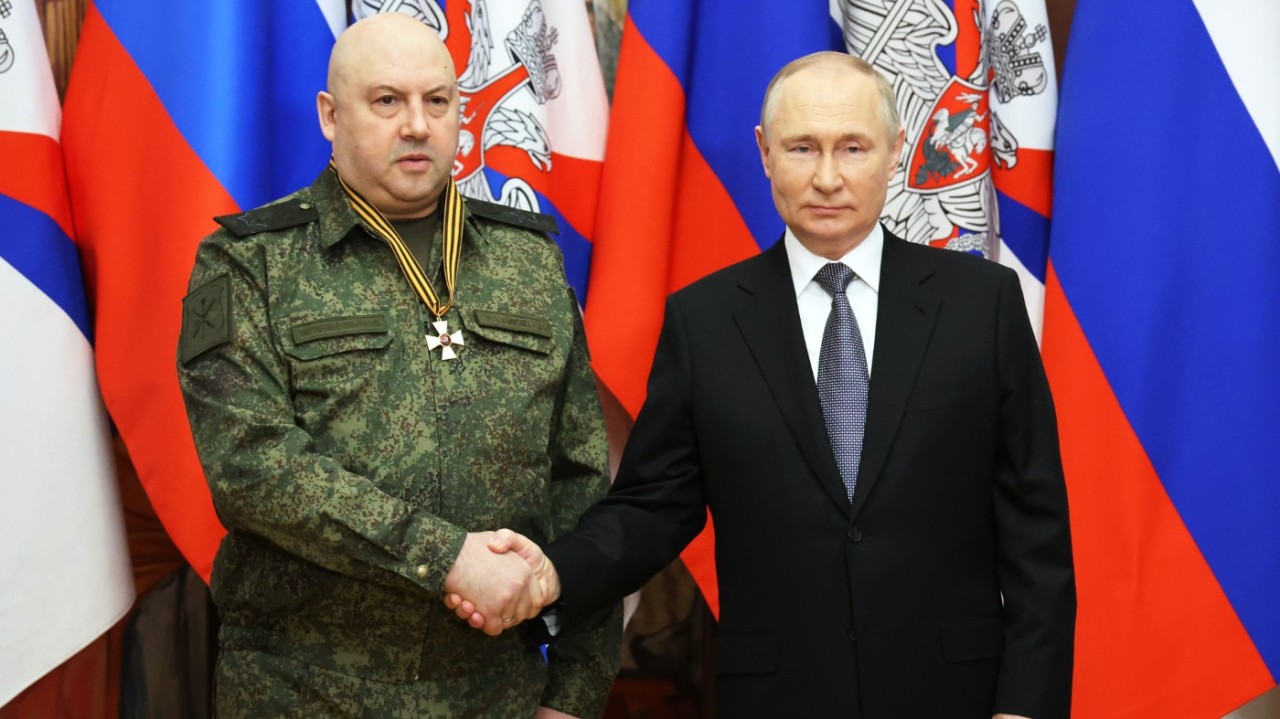 Repeated, systemic military defeats in Kyiv, Kherson, and most recently in Bakhmut, have Russian President Vladimir Putin and the Kremlin scrambling to explain to the Russian people how to make sense of the deepening mess they are creating in Ukraine. Recently, Putin made that lift even heavier by uttering the word “war” in place of his legally enshrined descriptor, “special military operation.” Freudian slip or not, Putin’s use of the word “war” reveals a man who is at war with his own words — especially since his grandiose words do not match the reality of Russia’s military performance in Ukraine.

Not only is Putin losing the ground war in Ukraine, but he is also faltering in his own dystopian narrative. Initially, he claimed his “special military operation” was limited in scope: protect the Donbas and seek a change of government in Kyiv. On Dec. 22, after attending a State Council meeting in Moscow, his war justification was laid bare as a lie. Putin’s intent was war all along, when he noted, “Our goal is not to spin the flywheel of military conflict but, on the contrary, to end this war.” It was a blatant unconscious admission that the Kremlin was always out to conquer Ukraine and establish Putin’s Kievan Rus’ vision of empire.

Losing has a way of making hollow words come back to haunt you, especially battlefield losses: an estimated 107,440 casualties, 3,031 tanks and 6,093 armored personnel carriers lost or destroyed, and repeated humiliating Ukrainian Tu-141 drone strikes 500 to 600 kilometers deep inside of Russia, including the Boxing Day attack on the Engels-2 airbase.

Haunting, too, are the senseless deaths of Russian soldiers and conscripts sent in human wave assaults against Ukrainian forces in Bakhmut. Their loss is not changing control of the battlefield in Russia’s favor and is becoming just as ineffective as Russia’s drone reprisal attacks across Ukraine, given Kyiv’s increasing capacity to defend against them. 2023 dawned with fresh attacks by Russia, and then a Ukrainian strike that killed 63 Russian soldiers.

Yet, despite his words indicating otherwise, Putin is losing both his war and his “special military operation.” Limited “special military operations” do not result in the wholesale annihilation of your military; only failed wars do. What was intended to be a quick action to defend the Donbas  and topple Ukraine’s government has descended into a vengeful, highly personal, win-at-all-costs mission to eradicate Ukrainian culture.

The tone of Russia’s state-controlled media quickly reflected Putin’s change in words to defend the war. Political and military commentators began openly calling for Ukraine’s destruction as a nation and for its national identity, language and culture to be forever destroyed. Russia’s military targeting decisions reflected these words as Russian forces began intentionally attacking cultural sites across Ukraine.

Words, however, do not win battles. Nor does attacking noncombatant statutes, theaters or monasteries. Domestic support for Putin’s war is wearing thin in Russia and Putin is desperate to change his words and shift the blame away from the Kremlin and onto the West. But even his attempts to blame NATO are falling short. Margarita Simonyan, the editor-in-chief of Russia Today, reportedly called for the end of everyone telling “lies.”

Putin, however, is not ready for truth-telling. With battlefield failures, his foreign minister, Sergey Lavrov, has no diplomatic alternative but to wage war against Washington, NATO and Kyiv with empty words to try to achieve diplomatically what Russia’s military is incapable of accomplishing. It will not work. Despite Russia’s inability to win by force, Lavrov keeps reiterating that if Ukraine does not comply with Russia’s demands and continues its resistance, its demilitarization will be ensured by the Russian army.

Moldova is not buying Putin’s meaningless words, either. President Maia Sandu recently called out Lavrov’s tactic, noting, “Russia is now using its standard tools — threats and attempts to intimidate other countries,” and adding, “I have nothing to discuss with the aggressor country.”

Ukraine will not submit to Putin’s imaginary words or to Lavrov’s wishful thinking. President Volodymyr Zelensky’s 10-step peace proposal is proof of that. It includes war tribunals to hold the Kremlin accountable for war crimes; Russian withdrawal of troops; cessation of hostilities; and the recognition and restoration of Ukraine’s state borders, including the four territories Russia illegally annexed and, pointedly, the Crimean Peninsula.

Putin’s war with his own words could create existential risk for his regime. His inability to reconcile his words with reality in Ukraine may have contributed to at least one failed Valkyrie-like coup attempt. Lavrov, seemingly, confirmed this when he warned the U.S. against carrying out a “decapitation blow” targeting Putin.

In what could be the start of an elongated Hitler-like “night of the long knives,” General Alexei Maslov, former commander in chief of the ground forces of the Russian Federation, and later Russia’s military representative to NATO, died “unexpectedly” on Christmas day. Putin had been scheduled to meet with Maslov before abruptly canceling.

Is it possible that Maslov was orchestrating a coup to oust Putin? His position, status and previous association with top NATO officials and generals add credence to that theory. Putin’s Federal Security Services may have thought so and possibly took action to remove the threat.

For now, Putin’s only escape from his war of words is to take Russia down a path to total conventional war. That means, essentially, escalate the ground war to de-escalate his words and Pollyannaish propaganda. The Kremlin appears to have started that process by announcing a 1.5 million-man army and 50 percent increase in Russia’s defense purchasing in 2023. Will it work? Likely not. So far, the Russian military has been unable to back up any of Putin’s words on the battlefield.

In the end, it would seem that Zelensky’s words to Putin are the only words that will matter for posterity: “No one will ever forgive you.”

Jonathan Sweet, a retired Army colonel, served 30 years as a military intelligence officer. His background includes tours of duty with the 101st Airborne Division (Air Assault), DIA, NSA and NGA.  He led the U.S. European Command Intelligence Engagement Division from 2012-14, working with NATO partners in the Black Sea and Baltics.  Follow him on Twitter @JESweet2022.

Mark Toth is a retired economist, historian and entrepreneur who has worked in banking, insurance, publishing, and global commerce. He is a former board member of the World Trade Center, St. Louis, and has lived in U.S. diplomatic and military communities around the world, including London, Tel Aviv, Augsburg and Nagoya. Follow him on Twitter @MCTothSTL.