The crypto market is producing a turn that could result in more uptrend gains. Still, a countertrend trade in the current environment is highly risky, and one should handle their own risk accordingly.

Bitcoin price is putting forth optimistic signals as the peer-to-peer digital currency has risen by 3% since 2023’s opening bell. The move north took place after the bulls established a higher pivot point at $16,333 on December 30, compared to the previous bearish attempt that was halted at $16,256 on December 19.

Bitcoin price currently auctions at $16,854, up 1% on the day after falling just $9 short of tagging the psychological $17,000 resistance. As January 4th’s market nears the final hour, the BTC price seems poised to settle above the recently breached 21-day simple moving average (SMA) at $16,750.

In doing so, sidelined bulls could begin re-entering the market to challenge key levels within December’s trading range. Ultimately, the December swing high at $18,387 could succumb to a challenge, resulting in a 9% Increase from BTC’s current market value. 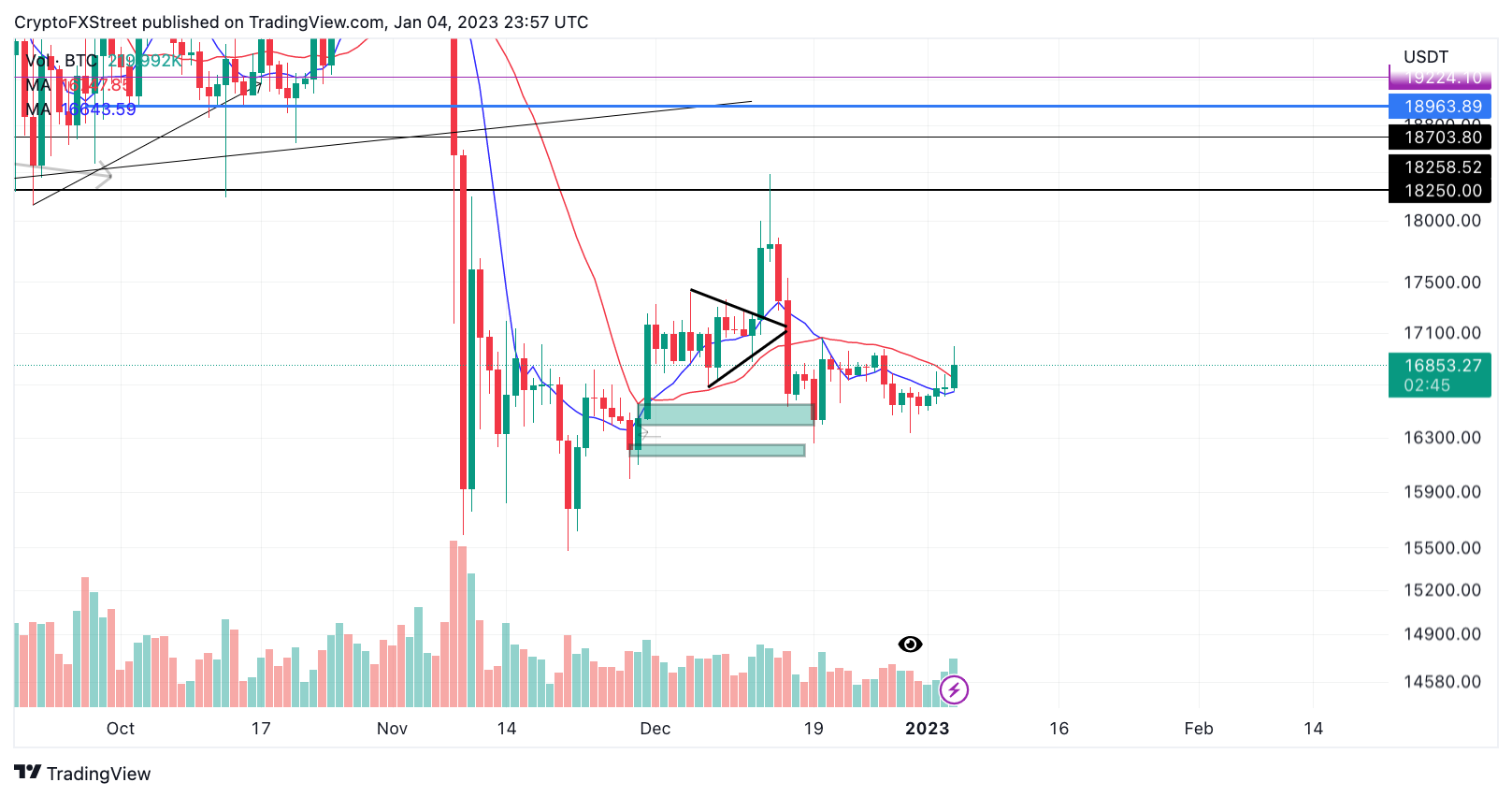 A daily close below the recently breached 8-day exponential moving average (EMA) at $16,500 would void the newly established uptrend’s possibility to rally further. As a consequence, the 2022 low at $15,476 could be subject to a liquidation, resulting in a 9% decline from the current Bitcoin price.

Ethereum price has risen by 6% since the start of the new year. The bulls have produced a bullish engulfing candle back into October’s support zone, aiding two previous countertrend rallies. Like Bitcoin’s technicals, the decentralized smart-contract token hurdled both the 8-day exponential and 21-day simple moving averages during January 4th’s upward move.

Ethereum price currently trades at $1,216. A Fibonacci retracement tool surrounding October’s swing low and swing high shows the current rise as just a 23.6% retracement. If the market is genuinely bullish, the bulls should be able to rally into the midpoint of October’s trading range at $1,400, resulting in an additional 12% gain.

Invalidation of the bullish thesis would be a closing candlestick beneath the recently colliding moving indicators at $1,210. If the breach occurs, the bears could re-route south and challenge December’s low at $1,150, resulting in a 7% decline.

XRP price has not joined the bullish plot witnessed by the other two cryptocurrencies. As of January 4, Ripple coils between the 8-day EMA and 21-day SMA, only garnering a mere 1.5% increase in market value since the start of the year.

XRP price currently auctions at $0.3485. Traders should keep their eye on the recent swing high established at $0.3605. A second attempt to hurdle the barrier could be the move bulls have been waiting for. Key liquidity zones of interest would be the $0.37 a00nd $0.4000 swing highs established on December 13 and 27, respectively. The bullish scenario would create the potential for a 14% rally from Ripple’s current market value.

If the bulls hurdle $0.3600, the uptrend’s invalidation point would be the $0.3000 swing low established on January 2. A breach of the low would void the bullish potential and lead the way for the bears to target the 2020 liquidity levels near $0.2700 and potentially $0.2500, resulting in a 30% decline from Ripple’s current trading price.