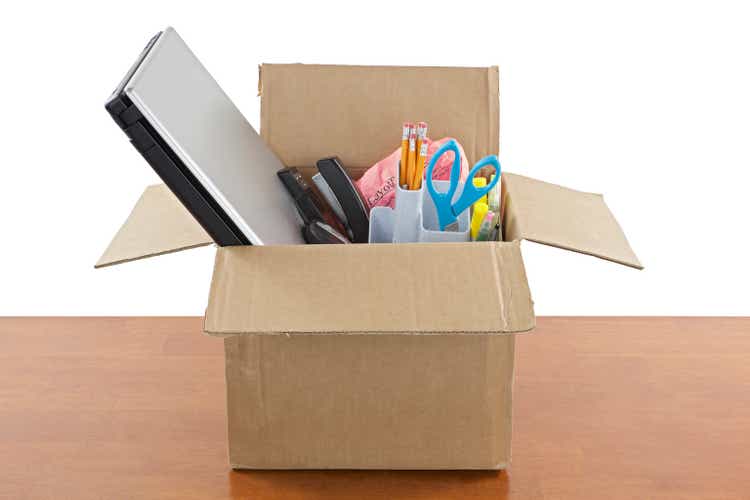 Tech layoffs are coming thick and fast as the industry pares back on staffing amid macroeconomic headwinds. The first waves occurred in the middle of last year, but are only growing in strength and numbers. Many companies hired too aggressively during the pandemic, and they are realizing that inflated payrolls and elevated costs are not holding up in the current business environment.

The latest: Salesforce (CRM) is cutting 10% of its workforce, and is closing some offices, leading to $1.4B-$2.1B in charges for the company and around 8,000 layoffs. Amazon (AMZN) is also slashing its headcount – by over double that figure. The retail behemoth has confirmed that 18,000 employees will get the axe, with the bulk of the roles due for elimination concentrated in the firm’s e-commerce and human resources organizations.

“The environment remains challenging and our customers are taking a more measured approach to their purchasing decisions,” Salesforce co-CEO Marc Benioff wrote in a letter to employees. “Amazon has weathered uncertain and difficult economies in the past, and we will continue to do so,” CEO Andy Jassy declared. “These changes will help us pursue our long-term opportunities with a stronger cost structure; however, I’m also optimistic that we’ll be inventive, resourceful, and scrappy in this time when we’re not hiring expansively and eliminating some roles.”

The persistently tight labor market is playing into the Fed’s decision to continue raising rates, but at a smaller increment, according to the minutes of the FOMC’s meeting on Dec. 13-14. Last month, the Fed’s policymaking arm increased its key rate by 50 basis points to 4.25%-4.50%, a smaller increase than the 75 bps hikes it implemented in its previous four meetings. Officials also raised inflation expectations at their last gathering, with the median PCE inflation projection at 3.1% at the end of this year, up from the September projection of 2.8%.

No sign of a pivot: Fed officials agreed that inflation remained “unacceptably high” and risks remained to the upside. While October and November data were “welcome reductions in the monthly pace of price increases,” it would take “substantially more evidence of progress to be confident that inflation was on a sustained downward path.” The pace of increases for prices of core services, excluding shelter, was also notable, while that factor is likely to “remain persistently elevated if the labor market remained very tight.”

“Participants generally noted that the uncertainty associated with their economic outlooks was high and that the risks of the inflation outlook remained tilted to the upside,” according to the minutes. They named such uncertainties as: China relaxing its zero-COVID policies, Russia’s war against Ukraine, and the effects of many major central banks firming policy at the same time. Stocks gave up their gains on the news, but closed the session slightly higher on Wednesday in a volatile trading spell.

Outlook: With risks to inflation remaining elevated, no participants expected that it would be appropriate to reduce the federal funds rate target range in 2023. That uncertainty also means the Fed will have to be flexible when moving policy to a more restrictive stance. There was also discussion about balancing the risks of not tightening enough, which would lead to surging inflation expectations, as well as the lagged cumulative effect of continuous policy tightening, which could lead to unnecessary cuts in economic activity. (26 comments)

Stuck on the road

Whether it’s dwindling savings or poorly stocked dealerships, the U.S. auto industry just had its worst sales year in more than a decade. Only 13.7M vehicles were sold in 2022, according to the research firm Wards Intelligence, marking an 8% decrease from the previous year and the lowest overall figure since 2011. Sales had even surpassed 17M vehicles for five consecutive years before the coronavirus pandemic erupted in early 2020.

Quote: “When we started the year off, the whole industry had projections all above 16M,” said Jack Hollis, head of sales for Toyota (NYSE:TM) North America. “It’s not all doom and gloom,” he added, noting that there were signs that supply chain snarls were easing and raw material prices were coming down.

However, Toyota did lose its sales crown to General Motors (NYSE:GM) in 2022. The Michigan-based auto manufacturer delivered 2.2M vehicles in the U.S. due to a strong performance in its full-size pickup and SUV segments (the categories made up over half of total sales for the full year). Moving forward into 2023, the automaker expects EV sales to rise substantially and promote continued growth.

Six months after the U.S. Supreme Court overruled Roe v. Wade, the FDA has rolled out a regulatory change that will allow retail pharmacies to offer abortion pills. Until now, only a handful of mail-order pharmacies and certified doctors were allowed to prescribe and stock the tablets, but the new rules will grant more access to states where abortion remains legal. While pharmacies will have to decide whether to offer the drugs, some sellers have already jumped on the bandwagon.

Quote: “We intend to become a certified pharmacy under the program,” Walgreens (NASDAQ:WBA) said in a statement. “We are working through the registration, necessary training of our pharmacists, as well as evaluating our pharmacy network in terms of where we normally dispense products that have extra FDA requirements and will dispense these consistent with federal and state laws.”

Other companies, such as Rite Aid (NYSE:RAD), are reviewing the new FDA rules, while CVS Health (NYSE:CVS) said it will seek certification where legally permissible. Besides becoming certified, pharmacies must commit to only fill prescriptions from certified prescribers, while maintaining records and confidentiality. Prior to the pandemic, there was an “in-person” clause that required patients to see healthcare providers in a physical location, but that was relaxed in April 2021 and allowed the pills to be sent by mail.

Other details: Abortion pills containing mifepristone work together with another drug called misoprostol by blocking a hormone necessary to sustain pregnancy and causing uterine contractions. Mifepristone is sold under the brand name Mifeprex by Danco Laboratories, as well as by generic manufacturers like GenBioPro. According to the Guttmacher Institute, the use of abortion pills has steadily climbed among medical providers since first being approved in 2000, accounting for over half of all U.S. abortions last year.