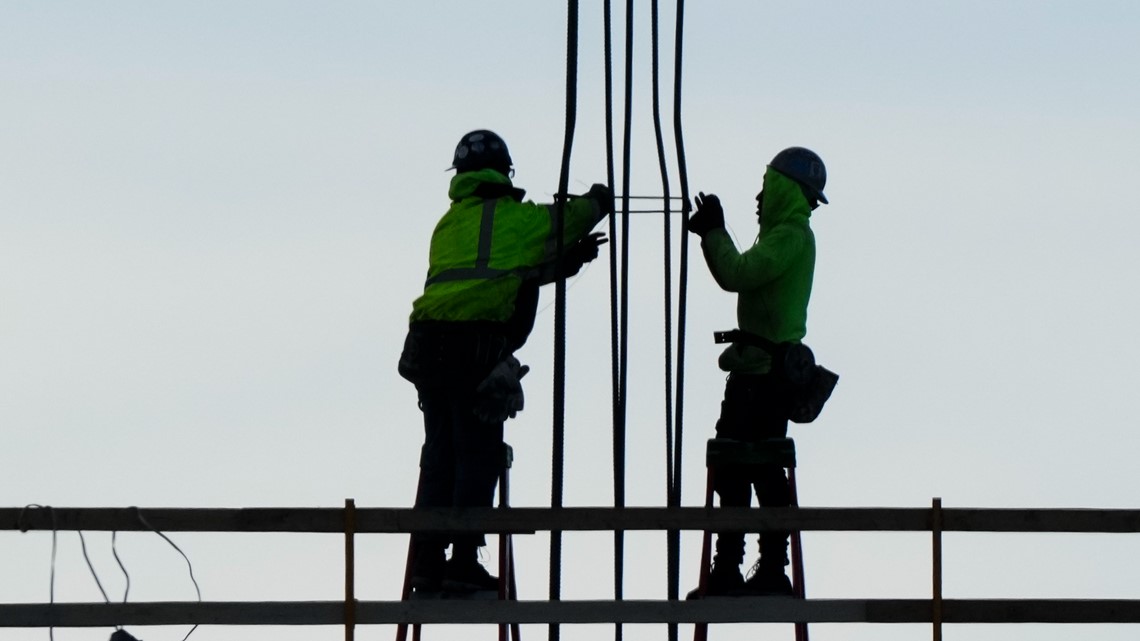 WASHINGTON — America’s employers added a solid 223,000 jobs in December, evidence that the economy remains healthy even as the Federal Reserve is rapidly raising interest rates to try to slow economic growth and the pace of hiring.

With companies continuing to add jobs across the economy, the unemployment rate fell from 3.6% to 3.5%, matching a 53-year low, the Labor Department said Friday.

All told, the December jobs report suggested that the labor market may be cooling in a way that could aid the Fed’s fight against high inflation. Last month’s gain was the smallest in two years, and it extended a hiring slowdown for most of 2022.

What’s more, average hourly pay growth eased in December to its slowest pace in 16 months. That slowdown could reduce pressure on employers to raise prices to offset their higher labor costs.

Average hourly wage growth was up 4.6% in December from 12 months earlier, compared with a 4.8% year-over-year increase in November and a recent peak of 5.6% in March.

“If these trends continue, we can feel more and more confident that the strength of this labor market is sustainable,” said Nick Bunker, head of economic research at the online job site Indeed’s Hiring Lab. “The outlook for next year is uncertain, but many signs point toward a soft landing,” rather than a feared recession.

Last month’s job growth capped a second straight year of robust hiring during which the nation regained all 22 million jobs it lost to the COVID-19 pandemic. Yet the rapid hiring and the hefty pay raises that accompanied it likely contributed to a spike in prices that catapulted inflation to its highest level in 40 years.

The picture for 2023 is much cloudier. Many economists foresee a recession in the second half of the year, a consequence of the Fed’s succession of sharp rate hikes. The central bank’s officials have projected that those increases will cause the unemployment rate to reach 4.6% by year’s end.

Though the Fed’s higher rates have begun to cool inflation from its summertime peak, they have also made mortgages, auto loans and other consumer and business borrowing more expensive.

For now at least, the job market is showing surprising resilience in the face of higher interest rates across the economy. Employers added 4.5 million jobs in 2022, on top of 6.7 million in 2021. All that hiring was part of a powerful rebound from the pandemic recession of 2020.

In June, year-over-year inflation reached 9.1%, the highest level in 40 years, before slowing to 7.1% in November. Last year, in an aggressive drive to reduce inflation back toward its 2% goal, the Fed raised its benchmark rate seven times.

Fed Chair Jerome Powell has emphasized in recent remarks that consistently strong job growth, which can force employers to raise pay to find and keep workers, can perpetuate inflation: Companies often raise prices to pass on their higher labor costs to their customers. And higher pay typically fuels more consumer spending, which can keep inflation elevated.

For that reason, Powell and other Fed officials have signaled their belief that to get inflation under control, unemployment will have to rise from its current low level.

Fed officials have projected that they will raise their benchmark short-term rate to about 5.1% this year, the highest level in more than 15 years. If hiring and inflation remain strong, the Fed’s rate might have to move even higher.

Technology companies have been laying off workers for months, with some, including Amazon, saying that they had hired too many people during the pandemic. Amazon has boosted its layoffs to 18,000 from an earlier announcement of 10,000. Cloud software provider Salesforce says it will cut 10% of its workers. And Facebook’s parent company Meta says it will shed 11,000.

Smaller tech companies are also being hit. Stitch Fix, the fast fashion provider, said Thursday that it’s cutting 20% of its salaried workers. DoorDash has said it will eliminate 1,250 jobs.

Yet outside of high tech, smaller companies, in particular, are still hiring. According to the payroll processor ADP, companies with more than 500 employees cut jobs in December, while businesses below that threshold added many more workers. And an analysis by investment bank Jefferies showed that small companies were posting a historically high proportion of job openings.

The Fed is concerned about the fast pace of wage growth, which it sees as a reason why inflation is likely to remain high. Average hourly pay is rising at about a 5% pace, one of its highest levels in decades.

Economists think growth likely amounted to a solid annual rate of roughly 2.5% in the final three months of last year. But there are signs it is slowing, and most analysts expect weaker growth in the current first quarter of 2023.

Consumers barely increased their spending in November, held down by modest holiday shopping. And manufacturing activity contracted in December for a second straight month, with new orders and production both shrinking.

And the housing market, an important economic bellwether, has taken a severe hit from the Fed’s rate hikes, which have more than doubled mortgage rates in the past year. Home sales have plummeted for the past 10 months.