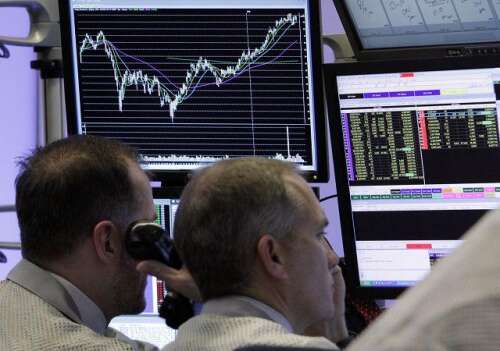 Fluctuations: don’t get emotionally swayed by the ups and downs of the stock market

Well, folks, it’s somehow January already. And you know what that means: training your brain to write 2023 instead of 2022 on everything. It also means the season of resolutions is officially upon us.

Maybe you’re someone who enjoys a good reset or “wellness check” at the start of a new year. (If that’s you, I bet you’re also one of those people who runs 5Ks on Thanksgiving – good for you, but the rest of us aren’t interested in joining, so please don’t ask.) I see your health goals, and I raise you … a financial fitness assessment!

That’s right, my friends: the New Year is the perfect time to check in on the growth of your investments. Let’s talk about what the stock market saw in 2022, what you can expect in 2023, and what it all means for you and your money.

In 2022, there were highs, there were lows, there were stretches in between that were more underwhelming than your annual Christmas phone call with Uncle Bob … But to sum it up, the stock market took a dip last year. A big dip. According to a December Forbes report, “the S&P 500 remains down nearly 15 per cent year to date, and it’s on track for its worst annual return since 2008, the year of the global financial crisis”.

Yikes! Sounds kind of harsh, doesn’t it? But no need to trauma dump all your thoughts and feelings about this on Facebook just yet. The good news is that in recent months, there has been a steady percentage increase. The stock market hit its lowest point of the year on September 30, 2022, but it’s been on a gradual incline ever since. And when it comes to investing, December really is the most wonderful time of the year – we can almost always count on holiday spending to raise the bar (literally). As expected, in early December, the market reached its highest peak since the late September low. Now that’s what I call a tiny Christmas miracle.

Of course, your last-minute shopping spree for Ugg boots (which are somehow back on trend) isn’t the only thing affecting the economy. Other factors, like inflation, interest rates, the housing market and unemployment numbers, also contribute to yearly investment outcomes.

In fact, Federal Reserve chairman Jerome Powell spoke on this back in August saying: “While higher interest rates, slower growth, and softer labour market conditions will bring down inflation, they will also bring some pain to households and businesses. These are the unfortunate costs of reducing inflation.”

In September, the month following his remarks, the stock market hit that infamous low we talked about earlier.

Now, I don’t know about you, but all of these unpredictable factors can sometimes make me feel like the sky is falling. (That’s not the only thing I have in common with Chicken Little, but let’s keep my height out of this.) Still, the most important thing to remember is that stock market pay-off is a long-term game. Slow and steady wins the investing race. And if you hares out there don’t want to believe this tortoise, there’s plenty of data to back me up.

For example, when Ramsey Solutions conducted The National Study of Millionaires, more than 10,000 millionaires were surveyed, and precisely zero listed single stock investments as one of their top three wealth-building tools. Instead, eight out of ten millionaires said they were able to reach their million-dollar net worth through employer-sponsored retirement programmes, like a 401(k) or Roth IRA match.

If you take advantage of benefits like this and consistently invest in diverse, growth stock mutual funds, your assets are proven to grow significantly by the time you reach retirement. Woody has Buzz, Monica has Rachel, and now you have compound interest as your long-term, loyal bestie.

The simple fact is the stock market is (and historically has been) the most reliable way to build wealth over time. Tracking your investment progress year to year is smart, but don’t forget to keep your eye on the end goal. No matter what the levels are looking like in the moment, the reality is that investing early and consistently sticking with it will bring huge returns in the long run every time. And I’ve never been much of an athlete, but that’s one race anyone can win!

• George Kamel is a personal finance expert with a countercultural approach to money. He’s the host of The Fine Print podcast and The EntreLeadership Podcast on the Ramsey Network. Since 2013, George has served at Ramsey Solutions, where his goal is to help people spend less, save more, and avoid consumer traps so they can make the most of their money. Follow George on Twitter, Instagram and Facebook or find out more about him online at ramseysolutions.com/personalities.