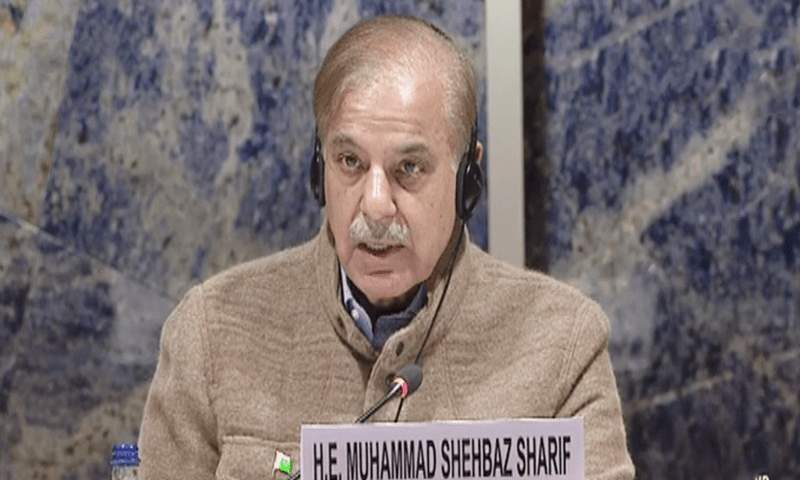 As Pakistan still reels from the impact of disastrous floods which submerged more than one-third of the country, the premier arrived in Geneva to co-host the ‘International Conference on Climate Resilient Pakistan’ alongside the UN chief.

The purpose of the day-long moot — which is being attended by heads of state and government and other stakeholders — is to marshal international support to rehabilitate the population affected by super floods and reconstruct damaged infrastructure in a climate-resilient manner.

In his opening address at the conference today, PM Shehbaz said that the world was standing at a “turning point of history” today.

The premier recalled that Pakistan witnessed a “monsoon on steroids this year” that affected 30 million people, displaced more than 8 million people and washed away roads spread over 8,000 kilometres.

“One can go on and on but to truly say, we are racing against time. We are thankful for the support extended to us by the Asian Development Bank, UN, International Monetary Fund and several other international organisations.”

PM Shehbaz said that apart from the aid Pakistan received for flood rehabilitation, the state “responded courageously” to the disaster.

“They saved thousands of lives and quickly restored disrupted communications […] resilience funds were repurposed to provide cash grants of than $400m to more than 2.7 million households.

“But nothing can go back to normal […] we will have to keep making tough choices and I am painfully aware that harsher reforms will make lives harsher than ever before,” he pointed out, contending that the “resource gap” was so wide that it had to be reshaped.

The premier went on to say that his government had prepared a comprehensive plan for recovery, rehabilitation, reconstruction and resilience — the 4RF plan.

“The first part of the plan reflects the recovery and reconstruction, bearing in mind that the minimum funding of $16.3 billion is required, half of which will be met with domestic resources, half from foreign resources.”

He explained that the second part of the plan incorporated flood-resilient design and infrastructure, such as protecting highways and early warning systems, of which $8b would be required over the span of three years.

“This conference today is not just about helping to rebuild lives, but in fact, it is about the solidarity and vision needed to ensure a future not just on paper but in schools and homes.”

Today, PM Shehbaz stressed, “I am asking for your support for those who have lost their life savings, homes, and livelihoods and are facing the harsh winter under open skies”.

“I am asking for a sustained international support plan to meet this daunting challenge, for a new lifeline for these people. Together we have to rebuild their lives and their dreams,” he concluded.

In his opening remarks at the Geneva moot, UN Chief Antonio Guterres urged the international community for “massive investments” to help the country recover from last year’s devastating floods.

“No country deserves to endure what happened to Pakistan,” the secretary general said, revealing that 9m people had been pushed to the brink of poverty.

“But the people of Pakistan met this epic tragedy with heroic humanity. I will never forget the personal testimonies of women and men I met in September. They left their own homes to help their neighbours and bring them to safety.”

He stressed that rebuilding Pakistan in a resilient way would need $16b but added that “far more” would be required in the long run.

“Initiatives to address daunting social and environmental challenges are needed […] reconstructing homes and buildings, and redesigning infrastructure including roads bridges, schools and hospitals.”

Guterres went on to highlight that the people of Pakistan were “doubly victimised” by climate disasters and “morally bankrupt” global financial systems. “This system routinely denies middle-income countries of debt relief and concessional relief needed to invest in resilience against natural disasters.”

Hence, he pointed out, there was a need for creative ways for developing countries to access debt relief and concessional financing.

“We need to be honest about the brutal injustice suffered by developing countries due to climate change. If there is any doubt about loss and damage, go to Pakistan. The devastation of climate change is real.”

Towards the end of his address, Guterres said that today’s conference was the first step on a long journey to the recovery and reconstruction of Pakistan.

He promised that the UN would be there with the country and that every step will be inspired by the endurance and generosity of the people of Pakistan in this critical and colossal mission.

French President Emmanuel Macron vowed to bring in a contribution of $10m for aid support to Pakistan.

Addressing the Geneva moot via video link today, he said that Paris was ready to support Pakistan in its talks with financial institutions, as the country faces huge losses from recent floods.

France will continue to provide expertise and some financial support to the country, he said.

Will need support for the next several years: Bilawal

In his address, Foreign Minister Bilawal Bhutto Zardari stressed that Pakistan will need considerable support over the next several years to implement a comprehensive plan for flood recovery.

“At least half of the framework plan will be implemented from our own resources,” he told the moot.

He underlined that the government of Pakistan had worked with world institutions including the UN, the World Bank, the Asian Development Bank, and the European Union to prepare a comprehensive framework document on resilience, rehabilitation, and reconstruction.

“At the level of our local communities, we are already engaged in rebuilding in the restoration of homes, villages, roads, and communication networks. “

Bilawal vowed that the government will transform the challenge of recovery and reconstruction into an opportunity to build a more resilient Pakistan and economy which is dynamic and sustainable.

“We are determined to do it in an open, transparent, and collaborative way. The rationale for this conference is to express international solidarity with Pakistan as it begins its journey towards building back better.”

He expressed gratitude to the UN for convening the conference. “We remain steadfast in responding to the emergency needs of the affected population and the reconstruction of affected infrastructure.”

He asserted that the country was on track of its macroeconomic fiscal agenda which he said focused on increasing revenues, spending on social sector programmes, decreasing expenditure and creating more fiscal space for reconstruction and rehabilitation.

“Right now, Pakistan is facing challenegs on account of additional outlays, incurred and projected for the flood-related rescue and rehabilitation needs.

“Pakistan is carrying out the necessary fiscal reforms but we believe we urgently need short term assistance as we navigate a number of challenges,” Dar highlighted.

“Our urgent expectation is not merely a commitment for resources but we are also looking at our own budget inflows and assistance during the remainder of the current fiscal year in order for government to continue to provide relief.”