US inflation data in the coming week are expected to stay consistent with a gradual step-down in cost pressures, and will help determine the size of the Federal Reserve’s next interest-rate increase.

The consumer price index excluding food and energy, known as core CPI and seen as a better underlying indicator than the headline measure, is projected to have risen 0.3% in December.

While slightly more than November, the monthly advance would be in line with the average for the quarter, and well below the 0.5% average seen from January through September amid the highest inflation in a generation. Thursday’s figures will be some of the last such readings policy makers will see before their January 31-February 1 meeting and rate decision, the first with a new rotation of voting members. Economists are penciling in a 25 basis-point increase in the Fed’s benchmark rate, though officials have indicated a half-point hike is possible.

The Labour Department’s CPI is expected to show core inflation increased 5.7% from a year earlier. That would be the highest December-to-December print since 1981. While it’s well above the Fed’s goal, and helps explain policy makers’ intention of keeping rates higher for longer, year-over-year price growth is moderating.

The report will surface nearly a week after the latest US jobs report showed that wage growth, a key factor in the inflation outlook, cooled in December.

The CPI figures highlight a relatively quiet data week that also includes weekly jobless claims and January consumer sentiment. The Washington-based World Bank will release its bi-annual economic outlook on Tuesday, and in an abstract warned of recession risks.

“The favourable inflation developments aren’t a result of Fed rate hikes — they’re mostly explained by China’s ugly exit from Covid-zero, and an usually warm winter. Still, the decline in energy prices has helped to sharply reduce near-term inflation expectations and has made inflation risks more two-sided. If this trend continues, it could be the ‘compelling’ evidence the Fed needs to see before it pauses or considers cutting rates.”

Elsewhere, data expected to show faster price gains in Japan and China, plus an assessment of how German economic growth cooled in 2022, will draw the attention of investors.

South Korea will kick off this year’s Asian central bank decisions, with the Bank of Korea on Friday set for what could be the last rate hike of its current tightening cycle as growth concerns grow.

Governor Rhee Chang-yong is keeping the focus on inflation while being increasingly wary of the impact of elevated borrowing costs on the economy’s momentum. In Japan, Tokyo CPI numbers on Tuesday are likely to show a further acceleration in inflation as investors keep a close eye on the Bank of Japan following December’s surprise monetary policy move.

Down Under, Australia is set to report retail sales and CPI numbers, with inflation expected to continue to gain pace.

China’s inflation data on Thursday are expected to show PPI remaining close to deflation in December, while consumer inflation ticked up slightly.

The People’s Bank of China is due to publish monthly credit data, which will be closely watched to assess whether monetary stimulus is flowing through the economy.

India will release inflation data, which will likely show a cooling in prices for a third straight month.

Fed chief Jerome Powell and peers from the UK, Canada, the Netherlands and Spain are expected to speak. European Central Bank Executive Board member Isabel Schnabel is also scheduled to appear. Friday will feature several data releases. Statisticians in Germany will publish an estimate of economic growth in 2022. Normally the first such assessment from among the Group of Seven industrialised nations, the report may hint at performance in the fourth quarter.

The numbers are likely to signal how the post-pandemic rebound in Europe’s biggest economy was smothered by the energy crisis following Russia’s invasion of Ukraine. Officials reckon Germany is currently in recession.

In the wider euro region, industrial production for November due the same day may show a partial rebound from a drop the previous month. ECB statistics showing whether banks repaid further long-term loans will also be published.

UK growth data for November, also on Friday, are expected by economists to show a decline from October. The report may help confirm the Bank of England’s fears that the economy there is slumping too.

Days after euro-zone inflation slowed to single digits in a release that still showed strong underlying pressures, consumer-price data from Norway, Sweden, Denmark and the Czech Republic will punctuate the week. Russia and Ukraine will release equivalent statistics. Among central bank decisions, Romanian officials are expected to further increase the key rate on Tuesday, while their Serbian counterparts may do the same two days later. Kazakhstan’s monetary decision is on Friday.

Mexico on Monday posts both full month and bi-weekly consumer price reports to close out 2022, and most analysts forecast a slight acceleration back up toward 8%. Core readings over 8% and the relatively more rapid cooling of US inflation may pressure Banxico to extend its record hiking cycle. 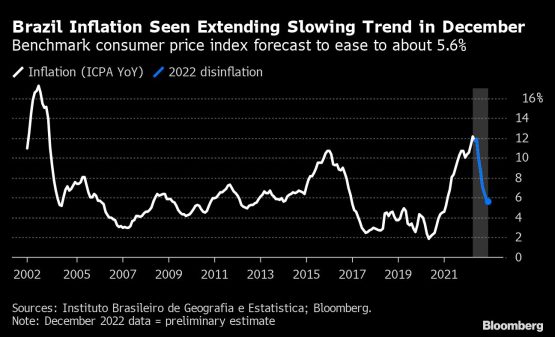 Many economists have been marking down their 2022 Argentina consumer price forecasts, with a consensus forming around 95% for the December year-on-year result. 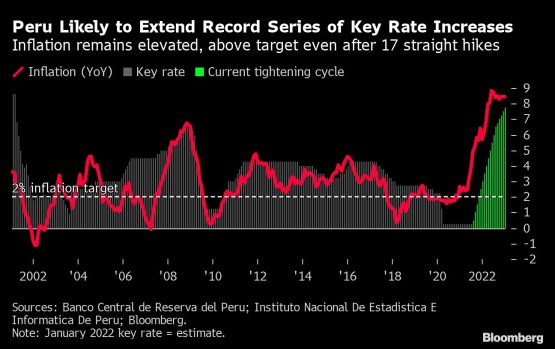 Back in Brazil, Latin America’s biggest economy outperformed for much of 2022 but signs of flagging momentum abound. Preliminary estimates see a second straight decline in the November GDP-proxy reading posted Friday.