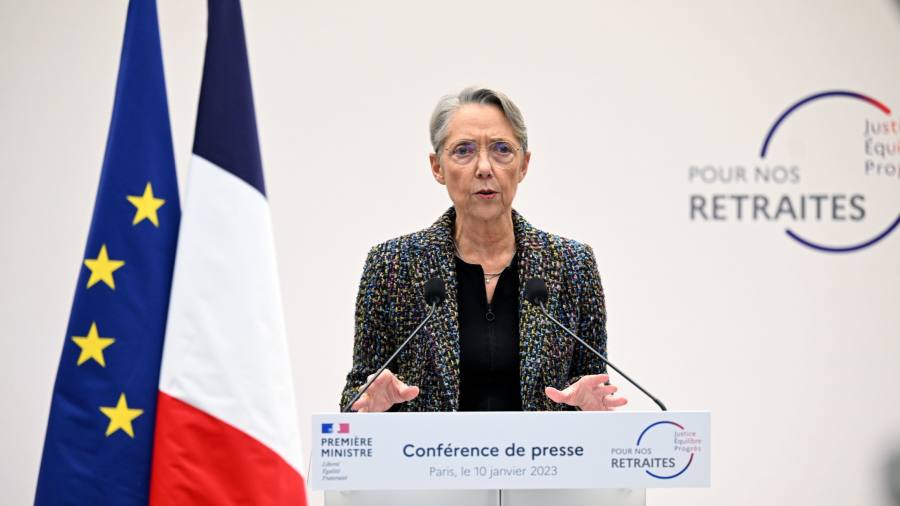 Emmanuel Macron’s government is to raise the retirement age by two years to 64 by 2030 as part of a broader overhaul of France’s costly pension system that is likely to trigger mass strikes later this month.

The plan presented by Élisabeth Borne, the prime minister, on Tuesday stopped short of raising the age to 65 as Macron had promised last year when running for re-election. Instead it tweaked the other parameter that affects French workers’ retirements by requiring people to pay into the system for 43 years instead of around 41 now if they are to qualify for a full pension.

In a bid to win support, the draft law, which will be presented to parliament in the coming weeks, will also include sweeteners. These include an increase in the minimum pension to around €1,200 a month from around €900 now and concessions for older people with physically demanding jobs.

Borne urged labour unions and opposition parties to face the reality that France’s pension system, which relies on currently active workers to fund the payments, would be plagued by deficits as the population ages in the coming decades.

Borne said the system had to “evolve to ensure its future”, stressing that other European countries had already raised their retirement ages. “I know French people are worried about the changes, and we want to explain it and convince them.”

But with polls showing around 70 per cent of the public to be opposed and labour unions planning nationwide protests to begin next week, passage of the overhaul will be difficult.

Given that Macron’s centrist alliance lost its majority in elections in June, it will need the votes in parliament of the conservative Les Republicains, who have indicated they are open to backing the law. Leftwing parties and Marine Le Pen’s far-right Rassemblement National are staunchly opposed to raising the retirement age, arguing that blue-collar workers will be unfairly penalised because they often start work at an earlier age.

The battle is shaping up to be a key test of Macron’s reformist credentials and a defining moment of his second term. He was forced to abandon a different, more ambitious version of pension reform after months of strikes and the arrival of the Covid-19 pandemic in 2020. His allies say he sees getting it done this time as key to advancing his pro-business agenda.

Frédéric Souillot, head of the Force Ouvrière union, put the government on notice earlier this week that unions were willing to shut down the economy to stop the pensions law.

Far-left leader Jean-Luc Mélenchon called the proposal a “grave social regression”, while Le Pen called it “unjust” and said the French could count on her far-right party’s “total determination” to block it.

Macron is forging ahead with the reforms at a difficult time as economic growth has slowed and households and businesses face rising energy costs and high inflation. Public finances have also been strained by the pandemic and massive aid packages to blunt the impact of the energy crisis.

Without changes to the retirement system, France is set to record an annual deficit of as much as 0.8 per cent of annual economic output during the next decade, according to a recent report from a governmental pension advisory panel. But the government said its plan would generate an estimated €17.7bn in annual savings by 2030 and return the system to an annual surplus instead of the deficit of €13.5bn it would face if nothing was done.

France spends almost 14 per cent of annual output on pensions to support about 17mn retirees, which is higher than the EU average of roughly 12 per cent, according to figures from Insee, the national statistics agency.