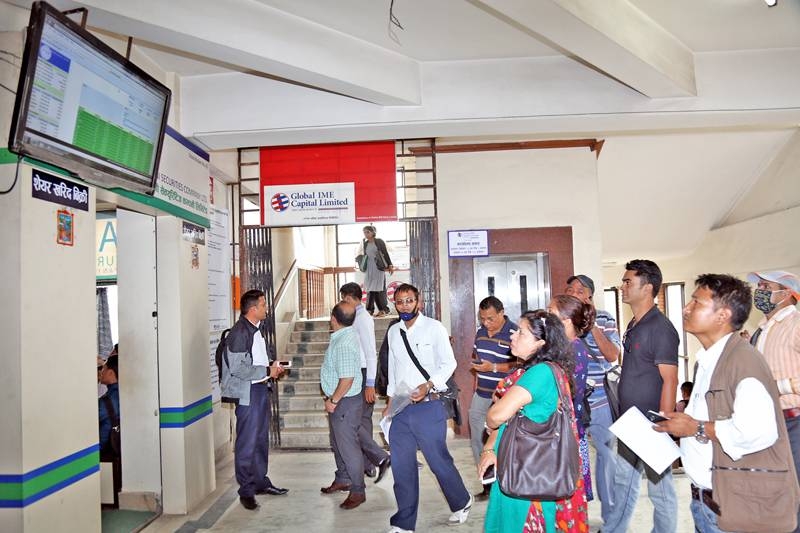 Share investors are hopeful for further growth of the stock market following the reappointment of Bishnu Paudel to the post of finance minister, the introduction of progressive policies related to the market, and some improvement in the economic situation of the country. However, despite the growth witnessed in the secondary market in recent days, it may not sustain as the market only mirrors the economy in the long term, market analysts say.

According to Chhote Lal Rauniyar, the market took a northward trend following the reappointment of Paudel to the Ministry of Finance as the market had progressed significantly when he took office previously. Also, the new government has listed the stock market as a priority market which was followed by the central bank extending the repayment deadline of the working capital loans till mid-June, 2025 and allowing repayment in five instalments.

Many businessmen and industrialists invested in the stock market during the COV- ID-19 period, when the benchmark index was nearing its alltime high, he explained.

“The economy will continue to face challenges unless those investors regain some of their money and the market capitalisation returns to its former glory of Rs 4.4 trillion. With the development of the secondary market, the introduction of the initial public offering, and recovery of lost investment by investors, the challenges faced by the country’s economy will begin to decrease,” he said, adding that there has also been some slight improvement is the country’s economy, which has strengthened the steady growth of the market.

“In recent times, the inflation had slowed a bit, while the forex reserves and remittance inflow into the country have improved, indicating some progress in our economic situation. As the newly-elected finance minister has also said that the economic pressure will ease within mid-February with the possibility of deposit rates decreasing alongside inter-bank lending, it is okay to say that the secondary market will continue its northward trend in the coming months,” he said.

However, Gyanendra Lal Pradhan, coordinator of the energy development council of CNI and capital market advisor for Federation of Nepalese Chamber of Commerce and Industries, was of the view that although the stock market may continue to rise, it cannot be considered bullish for now as it will not boom unless there is liquidity in the banking sector which can help increase the purchasing capacity of the investors. The market should cross its previous high of an alltime index to be considered a bullish market.

“The stock market is the mirror of the economy in the long term but it is the opposite in the short term. As the share market can change its trajectory at any given time, the market tends to take a short-term course within a limited period and mirrors the economy only in the long term. At present, the business environment is not very favourable, which has led people to switch to the share market. As there is less chance of the market decreasing further, the market is still far from witnessing a strong bullish correction despite the recent increment in the market’s index,” he said.

He further explained that the market movement after the formation of a new government is only related to trading and not long-term investment. “Although the indicators regarding the market are positive for now, it might not be sustainable in the long term as the country is still in huge debt, has witnessed decreased revenue, and is still low on forex reserves,” he opined.

The Nepal Stock Exchange (Nepse) index has witnessed a steady growth from around 1,800 points to above 2,100 points in the recent weeks. Although the market fell by 21.34 points today to 2,190.42 points today, the daily turnover increased to Rs 7.53 billion from Rs 5.22 billion on Monday.

Apart from the banking and mutual funds, all the subgroups landed in the red today.

A version of this article appears in the print on January 11, 2023, of The Himalayan Times.